The Ford Ranger: a New Favourite for Tradesmen

It’s no secret that Australians love utes. In 2014, three of the top ten cars sold in Australia were utes; Mitsubishi’s Triton, Ford’s Ranger and, of course, the Toyota HiLux.

The HiLux has been sitting comfortably at the top of the best seller list for many years; a reputation of reliability, sales support and performance solidifying a loyal base of tradesmen. Rising the ute ranks, however, is the Ford Ranger. In 2014, 4WD Ford Ranger sales experienced a 22.2 per cent increase on 2013, which in turn had a whopping 32.7 per cent bump from 2012.

At this rate, the Ranger could outpace the Toyota HiLux in a matter of years. Although head of Ford sales Graeme Whickman says that’s not the goal, telling news.com.au that “success isn’t overtaking Toyota… While Toyota is a sales leader, we don’t necessarily see them as a product leader”.

It’s a tight race out there, but the Ford Ranger XLS certainly is a leader itself in the ute segment for tradies. If you are looking to finance your new tradesmen vehicle, talk to Rapid Finance today on 1300 467 274 to find a great deal on car loans.

Ford’s aim is to challenge the assumptions that the HiLux is superior when it comes to the worksite.

The worksite is the traditional territory of the HiLux, but the Ford Ranger is chipping away at Toyota’s reign. Ford took off the gloves in a 2015 Ranger marketing blitz, which took direct aim at the HiLux. In one advertisement, a Ford Ranger tows to Toyota HiLuxes, boasting the superior towing capacity of a Ranger compared to a similarly classed HiLux.

Ford’s aim is to challenge the assumptions that the HiLux is superior when it comes to the worksite. The Ford Ranger can be configured to almost any worksite need including single, dual and super cab bodies, 4x2, 4x4, manual or auto, petrol or diesel. The XLS is positioned in the upper mid-range, below XLT and the flagship Wildtrak.

At $50k, it’s a decent package for the worksite. With 147kW and 470Nm, Rod Chapman of motoring.com.au concedes that it is not the most powerful in the pack, being slightly outclassed by the Colorado. But the engine’s performance is still one of the Ranger’s highlights, with notably swift acceleration.

This is backed up by dependable hauling power of 3500kg in tow, provided you have the optional towbar fitted. When compared with the HiLux SR5, that’s up to an extra tonne of hauling power. 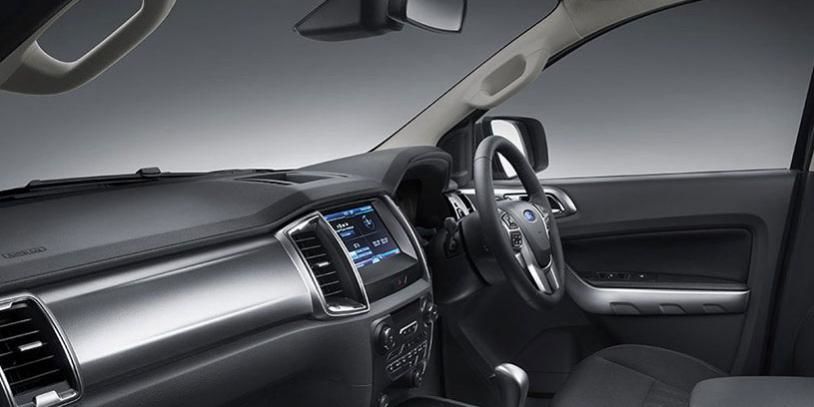 In some respects, the line between SUV and ute is beginning to blur. Once a ute was exclusively for work, the extra comfort and features found in modern utes have made the once bare ute cab feel more like a family car.

The best contender in this particular field is the VW Amarok—an unusually luxurious utility vehicle. The XLS has what counts under the hood, and leaves the extras to more expensive models, though it still holds its own as a reasonably comfortable workhorse.

Interior-wise, Ford have chosen practicality over luxury, using sturdy materials for upholstery and trim. The cabin plastics are also ‘utilitarian’, if not a bit bland, as Rod Chapman puts it. The basics are all there, however, such as audio player with USB and Bluetooth functions.

For those looking to boost the features department, then an upgrade to either the XLT or Wildtrak models is a necessity. There you find a 5 inch touch screen, rear view camera, dual zone climate control, among other gadgets. Though Ford didn't leave safety out of the XLS, with the ute reaching top marks and a five star ANCAP rating.

The Ranger XLS will have no troubles off road. With ground clearance of 232mm and a wading depth of 800mm the XLS has a body built for taking off road challenges head on. Chris Riley from Cars Guide praises the diesel engine design in this department, which is able to jettison water that manages to enter the engine.

This engine makes the Ranger XLS a dutiful off roader, in addition to its performance on the worksite. The torque comes in handy in lift off and ascents, with the assistance of its Bridgestone Dueler tyres. The Rangers solid performance off road was a notable feature in motoring.com.au testing in 2014, and it seems to continue to impress in this department.

Although, the XLS model comes without Hill Descent Control, which is a handy feature which keeps the vehicles forward momentum in check and eliminates the need to touch to brakes, even in off road conditions. Hill Descent Control only comes in the XLT or Wildtrak models of the Ford Ranger.

The Ford Ranger XLS is a great model within the Ranger class. The popularity of the Ford Ranger is testament to Ford’s efforts to deliver a solid all round ute.

The XLS is a high performance diesel option with plenty of torque and pulling power for heavy duty working conditions. If you’re looking for ute which can play as well as work, you might consider the next tier models, the XLT or Wildtrak, for added features, comfort and luxury.