A decade on the Evo IX can still impress

Launched in 2005, the Evo IX continued Mitsubishi's tradition of delivering stripped backed rally cars for the road. It was fast, loaded with cutting edge technology, and best of all, a joy to drive.

Until its replacement arrived in the form of the Evo X, the Evo IX was almost the only car available that could compete with the Subaru WRX STI for the title of top street legal rally racer.

Ten years on from when it first went on sale, the Mitsubishi Evolution IX is still a great drive. It's also much more affordably priced thanks to the number of used models on the market.

So, if you don't have the budget for the current generation Evo X or its upcoming successor, it may be worth looking back to the Evo IX for some cheap thrills.

There aren't many cars that can deliver 206kW of power and 355Nm of torque from a 2 litre four cylinder engine. Yet the Evo IX manages to do just that.

Of course, the reason it is able to provide that immense power from such a small sized engine is the whopping great turbochargers which they've bolted onto it.

Put your foot down and the car hunkers into the road, there's a brief pause before the turbochargers hurl you towards the horizon. It's ideal for overtaking and even better on a track where there are no speed limits.

Note: performance figures are based on the 2008 Mitsubishi Lancer Evolution IX (when new)

"The engine stomps its way to the redline with a satisfying sound and urge, all the while being able to lay the entirely of its power supply to the road."
- Karl Peskett, caradvice.com.au

"As the turbo winds up, it explodes through the mid-range and on into the top end. It's violent and ragged, singing its thrash-metal song to the 7000 rpm redline."
- Bruce Newton, drive.com.au

Built for the track

As with all Evos, the Evo IX shares more than a few chromosomes with the machines crafted by Mitsubishi's motorsports division 'Ralliart'. Shop around and you can even get one with the optional Ralliart performance pack, which includes tougher suspension and a bunch of 'Ralliart' badges.

What this means for everyday driving is that the steering is tight and precise. It's flat and stiff in the corners with the four-wheel drive system delivering plenty of grip.

Even if you brake late, you can still comfortably come around the bends. And, because of it's rally heritage, it'll perform well in both the wet and dry, no matter whether you're driving on and off road.

"Slewing into a corner, you’ll notice that the steering is super reactive. The slightest movement off centre, and your lateral inclination is apparent."
- Karl Peskett, caradvice.com.au

"Just maybe, mind, because this rally-inspired rocket is so focused, sharp and unyielding that you could still dearly love driving and hate this car."
- Bruce Newton, drive.com.au

"The overall competence of the Evo IX is remarkable and its limits ultra high."
- Melissa McCormick, motoring.com.au

Take away the turbochargers, the sports wing, the puffed up styling, and the Evo IX is still essentially a four door sedan. Sure, it's no Toyota Camry, but in terms of practicality, it's not half bad.

It's got a reasonably sized boot, space in the back for three (small) passengers, and many models come with the usual luxuries like a stereo, climate control, power windows etc.

As with many performance cars, the ride is very firm. It may be too uncomfortable for some's taste. Use that turbocharger a lot and you'll drain the petrol tank very quickly. Also, while enthusiasts will love the crackle and whirr of the engine, their mothers or neighbours may be less impressed. 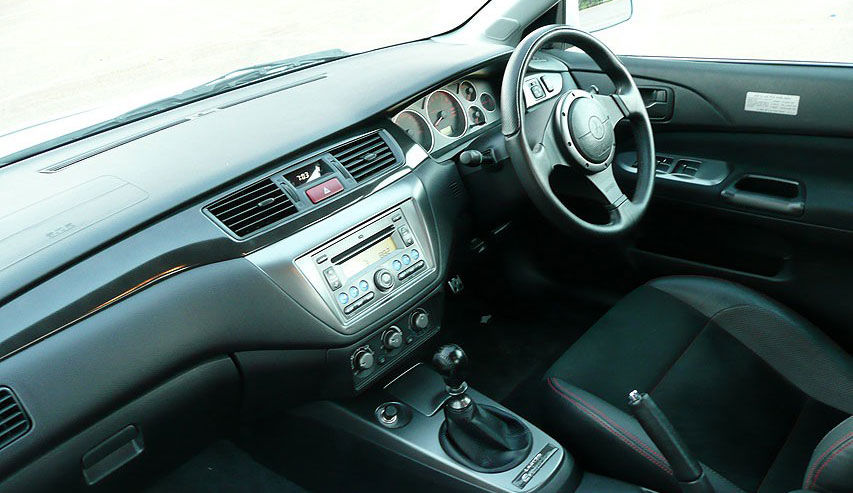 "It sucks down the premium unleaded very quickly, and with only a 55-litre tank on board, with too much enthusiasm you’ll drain the tank in 200kms."
- Karl Peskett, caradvice.com.au

"The ride is like rocks, banging on lumpy bitumen. The low Pirelli PZero Corsa tyres tram-track from one corrugation to another. "
- Bruce Newton, drive.com.au

"Steering is go-kart precise but lock-to-lock curve resembles an omelette and because its four-wheel drive you don’t want to go too near or long on full-lock."
- Melissa McCormick, motoring.com.au

While the Evo IX may not feature the refinements of the current generation Evo X, it is certainly not lacking in thrills or performance. It's also substantially cheaper to buy.

If you're looking for a stripped back rally car for the road at a more affordable price, the Evo IX could be the car for you. It's still, even after all these years, a real cracker of a car.