A Stylish Performer for the Safety Conscious

Looking for a safer ride?

European cars are usually associated with performance or luxury—and sometimes both. When it comes to Volvo however, the Swedish car maker is almost exclusively associated with safety. This persistent legacy is the result of a long history of innovation in car safety. From laminated windshields, crumple zones to safety door locks, many of the modern standards in vehicle safety were pioneered by Volvo.

Yet, this long history of being marketed as a vehicle for the safety conscious has developed a stereotypical image of Volvo vehicles—particularly the boxy relics of the 80s and 90s. As unfair as this image may be, it’s an unfortunate consequence of their remarkable achievements in vehicles safety.

Things are changing for Volvo. As other car manufacturers have played catch-up in safety technology, Volvo has been closing the gap when it comes to design and performance. Enter the 2015 Volvo S60 T5: a mid-range luxury sedan which puts Volvo’s safety under a sporty chassis and racy mechanics.

Looking for car finance? We can help match your circumstances with the right loan. Talk to Rapid Finance today on 1300 467 274.

The 2015 S60 T5 R-Design is the latest version in Volvo’s second generation of S60s. This generation, first shipped in 2010, targets a younger demographic whilst retaining an executive appeal. Part of this strategy is a modern and fresh approach to design.

The smooth and sleek exterior, as Adam Davis from motoring.com.au points out, has aged gracefully over this time. It’s a great looking sedan which matches its German rivals in the looks department, thanks to a sporty front and rear which give the R-Design styling kit a unique shape.

Inside the 2015 Volvo S60, the sporty details are also evident in the leather seats and user friendly layout. Subtle elements and finishes make this a satisfying driving experience, and Toby Hago from Drive praises the S60 as having one of the best instrument clusters on the market. 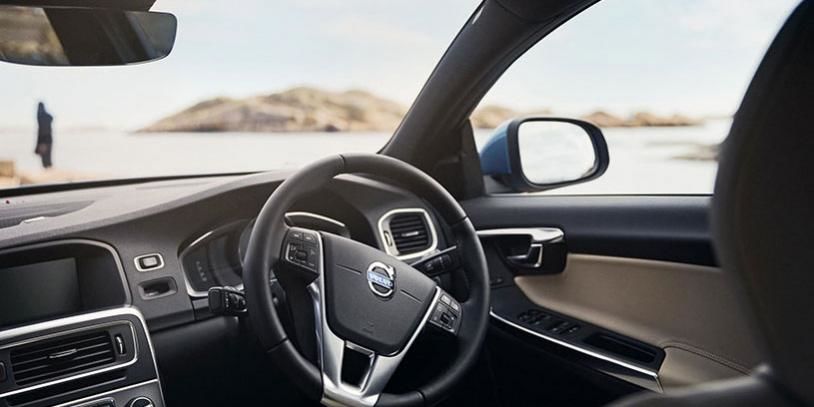 Another component in Volvo’s racier identity, of course, is what is under the hood. In 2014, Volvo entered the Australian V8 Supercars championship, the famous touring rally of road-going vehicles. Volvo's entry is a souped up version of the S60—the Polestar.

The T5 version of the S60 is watered-down compared to its racing cousin; a 2L 4 cylinder turbo petrol engine, compared with the Polestar’s 5L V8 developed for the V8 Supercars. The lower engine capacity means that the S60 T5 relies on the turbocharger for extra grunt, and the result is an efficiently powerful sedan. The T5 has a good power output of 180kW at peak rpm, but it’s the surprising amount of torque which really backs up the S60 T5, digging in at 350Nm, even at low rev ranges.

Toby Hago attributes this readily available torque as the real performance highlight of the T5, noting that it “gives the engine its character and easy demeanor”. Though Hago also notes a moment of lag before the turbo gets a chance to really kick in.

This solid performer is also a fairly light drinker - another feature going against the grain of the traditional Volvo image. Officially, the T5 has a fuel consumption of 6.4L per 100kms, though expect this to be higher in urban settings.

Volvo also offer the Driver Support Package as an additional safety upgrade—at additional cost—for the safety conscious driver. This suite is host to an array of technologies which aim to protect the driver, passengers, pedestrians and other road users, including cyclists. Some of this technology includes adaptive cruising, blind spot information systems with cross traffic alerts, lane departure warnings, lane-keeping aid, forward collision warning and front and rear parking sensors.

Although The Driver Support Package will increase the cost, there are a lot of extra features which any safety conscious road user will consider essential innovations in vehicle safety.

The 2015 Volvo S60 T5 is a sheep in wolf’s clothing. There is plenty in this executive sedan to satisfy racy sport design aesthetics and performance, whilst being extremely safe for both driver, passenger and pedestrians.

This car would fit a safety conscious driver who see the appeal of sporty European cars.

It’s time to shop for car finance. Our specialists will help you find a great finance solution for your needs. We are also experts in bad credit finance. So talk to us today on 1300 467 274.