The Subaru WRX: Still a Great Choice for Car Enthusiasts

Over 20 years ago the first WRX’s rolled off the Subaru assembly line into Australian suburbs and cities. Almost immediately, the upstart car gained a reputation as a street level performance vehicle. It carved out a home with a younger demographic who wanted a racy all-wheel-drive vehicle, at an affordable price.

Using the body of an Impreza, Subaru put almost all the WRX’s spare capital into improving the engine—a turbocharged four cylinder—rather than focusing on interior styling or features. Although this meant the WRX’s interior ended up looking dull, this wasn’t a problem for the car enthusiasts who adopted them. Keen to customise their ‘Rex’ with flashy aftermarket parts, car enthusiasts stuffed in subs, engine upgrades and performance styling. For owners of a WRX it was all about sound, spoilers and speed.

In 2015, what has changed? Subaru has now spun off the WRX as its own model, rather than a performance version of the Impreza. The hatchback version has also been put in the freezer. Despite these changes to lineage—genetically, things have only improved.

The 2015 WRX is an affordable and customisable performance vehicle for the next generation of car enthusiasts. For great deals on car finance, talk to the Rapid Finance team today on 1300 467 274.

The result is a meaty ride that is quick to peak revs, powering a grippy all-wheel-drive.

So, what does the 2015 version of the famous Subaru WRX have under the bonnet? A smaller engine.

That’s right—Subaru reduced the engine size from 2.5L to 2L. Subaru has not only managed to match power output, but made a very slight boost; there has been a 2kW and 7Nm improvement to power and torque, for total outputs of 197kW and 350Nm. These efficiency improvements are thanks to a new direction injection unit in the engine.

The result is a meaty ride that is quick to peak revs, powering a grippy all-wheel-drive. Alborz Fallah, founder of Car Advice commends the turbocharged boxer engine as having great acceleration off the line, and in gear. Although Fallah says that there is more than enough power to be found under the hood, no doubt WRX car enthusiasts will tinker with ways to get more power output. 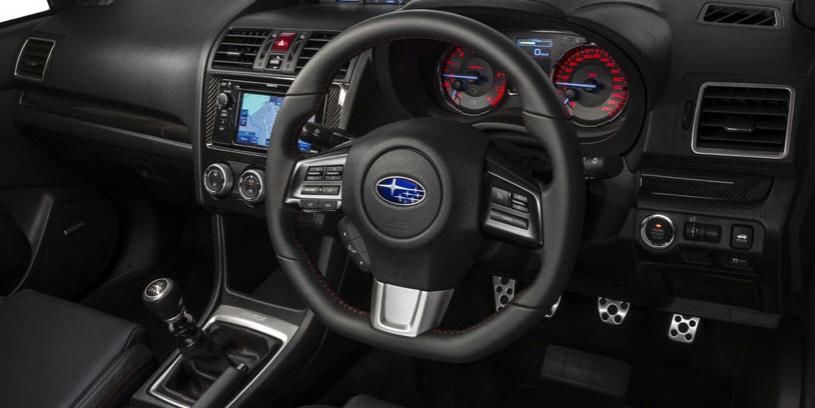 Now to the central nervous system: the transmission. Previous Subaru WRX enthusiasts will no doubt be capable manual drivers, perhaps even manual purists. That hasn’t stopped Subaru from experimenting with automatic transmission. For the first time, Continuous Variable Transmission is offered in the WRX.

The idea behind CVT is to provide a smooth, fuel efficient ride. Subaru has been including this technology in its cars, such as the Forester, since 2010. The appearance in a performance vehicle like the WRX is a surprising one, given that this technology tends to find the optimal rev range and stick to it.

In an effort to hand control back to the driver in ‘sporty’ situations, Subaru has offered 'Sport' and 'Sport#' modes, in addition to the default 'Intelligent' mode. Bruce Newton from motoring.com.au found that the S# mode was ideal for more racy and interesting tracks, but Toby Hagon from Drive found this mode too sensitive.

For manual transmission, things have also been modified. Subaru has shortened the first and second gearing ratios, to optimise performance on turning and inclines. The side effect, as Alborz Fallah points out, is that some time is lost when shifting into third when speeding up to 100km/h. Fallah concludes that this is a fair compromise to make: it gets rid of an awkward rev range, at the small price of a few milliseconds in drag race style acceleration.

The manual transmission may be the favourite configuration for car enthusiasts, however there is a slight hit to petrol efficiency at 9.2L compared to 8.6L.

On the outside, the Subaru WRX still looks like a WRX. It’s slightly wacky, but after two decades on the road it’s still a familiar breed of car. Hood scoop, pronounced fender, and LED lights have all been added to make the WRX stand out from the Impreza.

All the standard features are exactly that—standard. Matty Padgett from thecarconncetion.com figures that the styling is not nearly as compelling as the internal mechanics; sentiment that is probably shared by many. The 17 inch wheels cry out, begging to be bigger and bolder. Alborz Fallah notes that some drivers will be perfectly happy with a ‘blank canvas’—many would rather not pay for extra features they are keen to upgrade on their own.

On the inside, things are a little bigger thanks to a longer wheelbase, though there is a basic feel to the cabin. It has been jazzed up with sporty seating and wheel and the occasional highlight of carbon fibre, but for the most part it’s a blank canvas. Many owners will no-doubt get eager to swap out the stereo and speaker systems to really make their WRX a 'Rex'.

If you’re familiar with the Subaru WRX, you’ll easily recognise the latest iteration. Although it has officially broken off the Impreza line, the interior and styling remain fairly basic. But it’s what is under the hood that counts, and there is plenty of raw power to satisfy street car enthusiasts. Though most buyers will opt for the manual transmission, CVT is now an option for a particular type of car enthusiast.