Last year, one third of the 1.1 million new cars Australians bought were SUVs, and this healthy appetite for large vehicles is showing no sign of tapering off. Although Australia’s addiction to bigger cars is a recent development, the Kia Sportage has been there since the beginning.

Kia rolled out it’s first Sportage to the Australian public in 1996. Recently, however, the Sportage has become a favourite for motorists looking for a stylish and family friendly all-rounder. The third generation of Sportage, introduced in 2010, has been noted for having very few complaints from users, and is capable of most applications—from city driving, to off road.

The 2015 Kia Sportage builds on this recent legacy, with the Si Premium model providing motorists with an affordable, comfortable and reliable SUV. Although some modern infotainment features are noticeably missing with the Si Premium, this is a permissible compromise. The 7 year unlimited kilometre warranty from Kia is also worth a mention.

Though technically classified as an SUV, if the Kia Sportage was slightly squished and lowered, you might mistake it for a hatchback. Not that this is a bad thing. Hatchbacks, especially in 2015, have evolved to be bigger, roomier and more versatile vehicles. The Sportage certainly has these features, with the additional benefits of handling, height and 5-star ANCAP safety.

In fact, the Sportage is a sensible size for a small or growing family. The 2015 model has an overall length of just under four and a half metres, and a width of under two. By no means is it a hulking beast, but it has enough size to satisify most small families. A handy luggage space of 564 litres fills out to over 1300 with the seats down, well equipped for the family cargo; prams, flat packed furniture or a camping supplies.

During the week, its size means that it is suitable for the urban environment—traffic, reverse parking, tight corners—the Sportage offers space without feeling like you’re operating a tank.

One of the advantages the 2015 Kia Sportage is its overall design. It is a good looking car, and certainly beats its Asian counterparts in the design ring.

It wasn’t always this way. Kia has seen a gradual transformation thanks to Peter Schreyer, a designer and Audi alumni who joined the company in 2006. The Kia Sportage Si Premium is a good example of this leading design. On seeing the Si Premium in the distance, it could be mistaken for an upmarket German SUV, rather than a South Korean-owned, Slovakian-made SUV with a less-than-premium price tag.

Inside, the Kia Sportage takes a less-is-more approach to design which makes the dashboard feel less cluttered, minimal and functional.

Having said this, the lack of a modern infotainment system is a noticeable omission. Most new cars in 2015 include a colour screen on the dashboard for music, camera display and sat nav viewing. The Si Premium instead opts for a slightly dated red-on-black display with Bluetooth connectivity. The reverse camera display is instead neatly tucked into the rear view mirror. But, as Chris Fincham from motoring.com.au notes, this simple approach has makes for an uncomplicated user friendly experience, especially when it comes to Bluetooth pairing.

Those looking for a colour display could upgrade to the more expensive Sportage models which feature a 7 inch colour display. Alternatively, a smart phone hands-free kit is a much cheaper and up-gradable option. 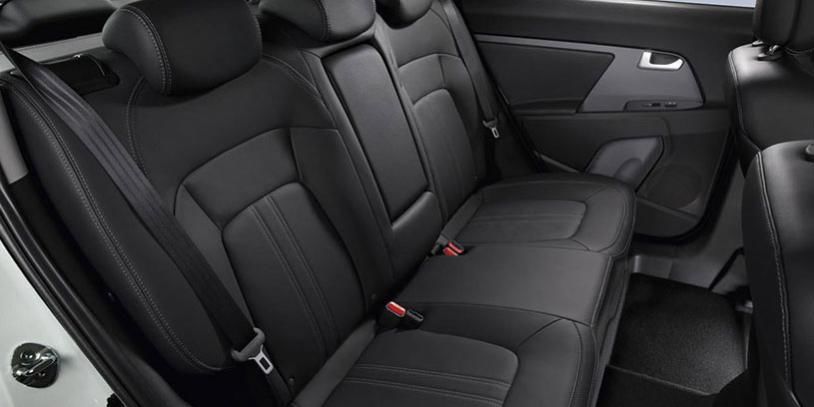 When it comes to grunt, the Kia Sportage Si Premium is more of an overgrown puppy, rather than a snarling wolf hound. It is certainly a capable SUV, but towing and hauling is not this cars primary function.

The Si Premium only comes in petrol 2WD. It performs very reasonably, with power output at 122kW. The result is a more than adequate ride around town, however Alistair Kennedy of Cars Guide and Toby Hagon of Drive agree that the Si Premium puffs and pants when ascending hills.

There is less consensus when it comes to fuel economy. Kia boasts an official 8.4L/100km, but both Toby Hagon and Alistair Kennedy agree that this is an underestimation, but they disagree by how much. Toby’s calculation is 12L per 100km, whilst Alistair’s is 10.1L. However, Chris Funcham from motoring.com.au records his fuel economy at below Kia’s official stats, at 8.1L per 100km.

Regardless, if you are looking for more power and better fuel economy, it might be worth thinking about upgrading to the Sportage’s diesel models, the SLi or Platinum.

This is a small family car which stylishly combines urban sensibilities and 5-Star safety in a well-sized SUV. There is a lot of competition out there in the Australian SUV market. If you are looking for gadgets galore then you might want to look elsewhere. Other features—such as Kia’s 7 year extended warranty—are an attractive proposition for anyone looking to upgrade the small family people mover.

Our final thought? The Kia Sportage Si Premium is an stylish choice for small families looking for versatility and room to grow.

Ready for a new car? Start shopping for your ideal car finance today. Get a Rapid Quote.