You don’t have to be a car enthusiast to spot a Ferrari. More beast than machine, these metallic monsters of red and yellow are a different species to the sedans and wagons found on city streets. The Ferrari 458 Speciale is a certain sub-species—a unique branch in the Ferrari family tree—to which this stark contrast has never been truer. The Speciale genome is so specialised it sacrifices most modern luxuries in favour of marginal improvements to speed and high-level performance.

The Ferrari 458 Speciale is the cousin of the 458 Italia, Ferrari’s luxury supercar. Ferrari cooked up the Speciale in their Maranbello lab by stripping the Italia of anything that didn't add to performance, including the audio system and cruise control. The result is a high-performance, high-response supercar that pushes the limits of automotive engineering.

The only next logical step is the complete transcendence of humans with machines. Until then, the Ferrari 458 Speciale is the next best thing for those who have the privilege to grace its wheel. For the rest of us, check out some more practical cars on our car review page, or find out more about car finance.

All the experts agree: this is a very special piece of extreme machinery. 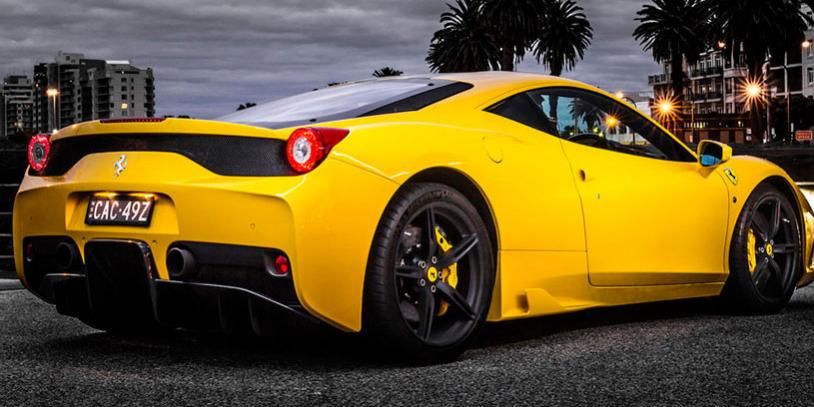 Most of us will only ever see the outside of a Ferrari. But even this is a pleasure. The raw energy of such a car—the aerodynamics, the colour, the badge, the openly visible engine—fills the surrounding air with tingling vibrations and a tactile sense of awe.

To the trained eye, spotting a Speciale model should be easy if you get a chance to look closely enough (just don't blink). Compared with the Italia, the Speciale has some additional fixed and moveable aerodynamic parts which increase the downforce at extreme speeds; turning vanes on the front corners, side shark fins and a pronounced rear spoiler are the most obvious giveaways.

Vertical flaps near the front bumper section open up at 170km/h to allow more air-intake into the radiator, whilst an additional flap opens at 220km/h for extra sticking power.

Internally, things have been stripped bare. Noticeably, there is no audio system. However that isn’t to say there is no luxury to be found: everything has been splashed with carbon fibre and high quality stitched layered microfibre. As Karl Peskett from The Motor Report points out: the deliberate omissions such as radio and cruise control are hardly missed. The Speciale, after all, is about one thing and one thing only…

Like an athlete on a strict diet and training routine, the 458 Speciale has been optimised for high-performance precision. The weight reductions over the 458 Italia amount to 90kg. Along with engine tweaks and aerodynamic improvements, this translates into an overall 5 per cent performance improvement. In real terms, that means that the Special is 0.4 seconds quicker to 100km/h than the Italia, for a total of 3 seconds flat.

Much of a muchness? Maybe, but maybe not. There is something truly satisfying knowing that you are driving the pinnacle of high-speed auto engineering. With so much raw power at the ready, Ferrari has built in a number of electronic programs to assist with stability. As Toby Hagon from Drive puts it: “It would take a bold person to switch off all the electronic ads, such is the rapid fire ferocity of the power delivery”.

It’s not just the raw power that makes the Speciale so special. It’s how it seamlessly plugs this power and speed into the hands of the driver; the sensitive yet responsive steering and throttle are so good that Jez Spinks from Car Advice concludes his own assessment by stating that “the bond between car and driver is sensational”.

This bond is created through the steering, throttle, brakes and transmission. Each component, to use Jez Spinks’ phrasing, is “flawless”. The car will effortlessly shift up and down gears with microscopic changes to throttle; slight steering movements manoeuvre the tailor made Michelin tyres along the tarmac with grip and precision; and the oversized custom carbon ceramic brakes will reliably bring everything to a neat and smooth halt.

Manoeuvring the 445kW of power is as intuitively as manuring your own body. You think it, and the Speciale reacts. All the experts agree: this is a very special piece of extreme machinery.

Ferrari admits that the 458 is for the most dedicated, most hard lined car enthusiasts out there. These supercar obsessives demand performance and speed above everything else. And Ferrari has delivered, at a price of over half a million dollars (Not including racing stripes. That additional pleasure comes in at an cool $19,000).

For the world’s richest petrol heads, the Ferrari 458 Speciale is a trophy and testament to the pinnacle of automotive engineering. For the rest of us, at least Ferrari has given us plenty to dream about. 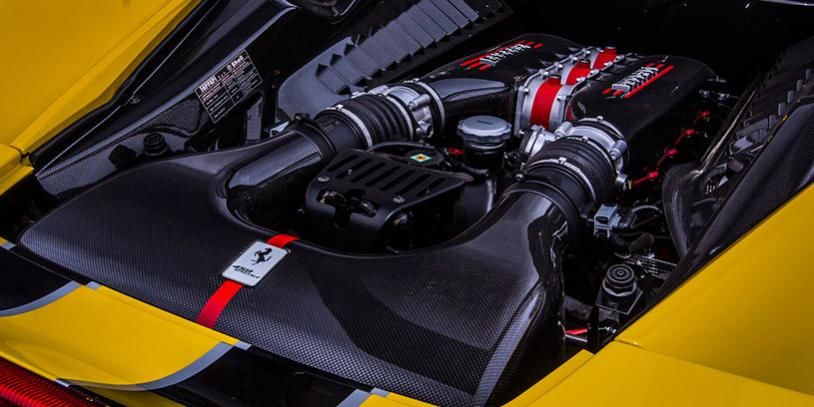