Finding a great car loan is like finding a great used car. You've got to put your best foot forward, compare options and negotiate. That's where the team at Rapid Finance come in.

Rapid Finance is rated 4.88 for customer satisfaction by 79 customers.

What is a used car loan?

A used car loan is a type of automotive finance. It provides used car buyers with funds for their preferred secondhand vehicle, which can also used as security on the loan. Interest rates can be fixed or variable.

You could get approval today

Great used cars move fast. So do we.

When it comes to used cars, the best deals often go quickly. So don't miss out. Apply with Rapid Finance today and you could get approval today.

Have Bad Credit Don't give up. We could help.

Whether you were previously bankrupt, or simply missed a utility bill, our team will work hard to find a great interest rate for your situation.

Please note: This is an estimate provided for illustrative purposes only, and is based on the accuracy of information provided. It does not constitute a quote. Additional fees and charges may apply dependent on your individual circumstances. Fees such as early repayment costs and establishment fees are not accounted for in the examples of weekly repayments. Interest rates may be subject to change throughout the term of the loan.

Used Car Loans – How to Get a Great Deal

Looking for a top bargain on a second hand car loan? Taking on lenders at their own game can sound intimidating, but with some industry knowledge on your side, you'll be well-placed to get yourself a great deal.

How to get a better deal on a used car

Thinking of buying a used car? Avoid the lemons with the Rapid Finance wholesale car network.

How To Negotiate a Used Car Loan

Buying a used car? Everything you need to know to get the lowest interest rate possible.

What our customers say

Honest and a great experience 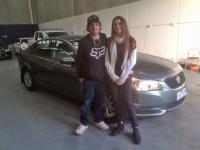